The next round of our Wonky Quilt Bee is starting up in October.  We've decided to do a traveling quilt, as we've seen a few other groups do.  We have six members in our group. Each member will have two months to add to the quilt before sending it onto the next person. 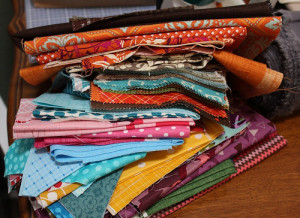 This and this are my inspiration.  I love the words and the way the colors all work together.  I love that the background is a myriad of solids neutrals.

I haven't had much time to sew, but have been doing a bit to work on my starter blocks.  So far, I've only been able to complete one word, and that may be it until I receive the quilt back next year.  Time is so limited right now and I want to send it soon!

I'm very excited to see how everyone's quilts take shape.  I love that we have two months to work on them and mull over our additions and designs without feeling too rushed to meet a deadline. 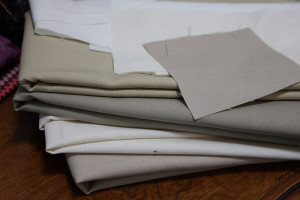 I'm sending along bits of fabric, some are FQ I purchased specifically for this project.  Others are things I had on hand.  I'm also sending along five neutral solids that will hopefully tie it all together.

As the month is nearing a close and work is starting to ramp up, I knew I needed to get these blocks done or they would be late!  The blocks are for Knottygnome.  She wanted small buildings and city themed houses, trees, etc.  She's looking to make a similar quilt to this one.  I made small blocks, but didn't add as much white space around each one as she will need.  I figure that she can add her own white space depending on how she wants to fit them together. 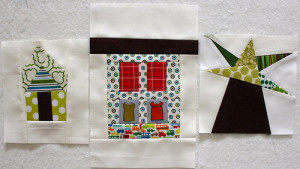 I ended up making her three blocks.  I usually just stick with making two blocks, but I wasn't entirely satisfied with my first two blocks, so I made a third. 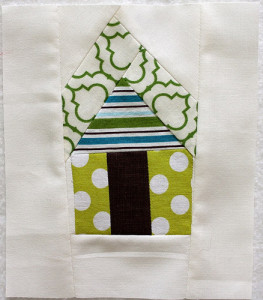 The first two blocks, I just fussy cut and sewed together, piecing as I went.  I had to backtrack a bit on the house, but it still came together.  I realized after a bit that the roof and sides of the house would need to be y-seams and I don't know how to do y-seams.  I tried and it didn't come out right.  I ended up sewing a bit of white on the end of the house and cutting the roof a bit; my original had more overhang. 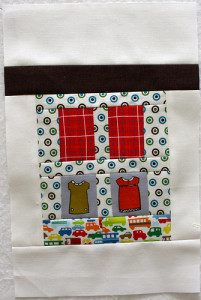 This one is supposed to be a skyscraper with traffic and a store front.  It didn't come out as well as I imagined it would.  It seems really busy.  Of course the entire block is 8", so it's a lot going on in a small area. 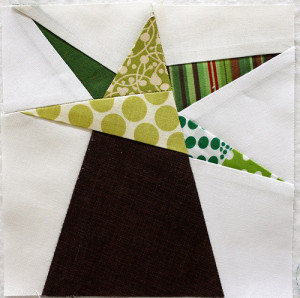 The tree came out well.  I decided to paper piece it and drew up my own template, which I didn't photograph until I was done with each segment.  It took a bit of trial and error to get the template just right.  The sections needed to be drawn in such a way that allowed me piece it together.  In a way, I had to backward map the sections. One thing to remember about paper piecing is that what you draw will actually be a mirror image of what you get.  I forgot about that until I was done and the tree was opposite.  It's not a big deal, since it's a tree, but other things could be more important.

The other point to remember is that you need to have a 1/4" seam allowance in all areas.  I remember to do that with this block, but I could see myself easily forgetting the seam allowance.

I paper piece a couple times a year, but it seems I always need a refresher on how to start.  It took me a couple tried on the first seam to get it right.  After that, though, the block went together quickly.

This is the first time that I'd designed my own paper piece template.  It was challenging, but not beyond my skill-set.  I can see myself trying it again, sometime.

I can't wait to see everyone else's blocks and the quilt when it comes together!

These blocks were made a while ago by my Wonky Quilt Bee friends.  I'd sent them small bits of fabric, the white and the brown for the tree trunks.  The request was applique trees.  I love how all the tress turned out. 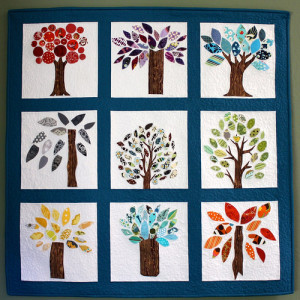 The quilt is sashed with Kona Teal.  It has become my new favorite color.  It makes each block stand out on it's own, and yet ties it all together.  The binding is Kona Teal, too.  Usually, I'd use some print for the binding, but I wanted the binding on this quilt to blend in with the rest of the quilt.  I contemplated using white to set the binding shashing apart from our green wall, but went with the Kona Teal.  I'm glad I did.  It makes everything flow well.  There's no hard edge and your eye is drawn to the trees, not the sashing. 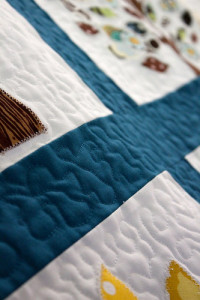 The quilting is simple stippling.  White thread for the white area and teal thread for the teal area.  I stippled pretty small puzzle pieces.  For some reason, the quilting on the white went really well.  Then my machine started acting up when I switched to the teal thread, even though it was the same manufacturer.  I found a ton of suggestions on how to adjust your machine for FM quilting on this blog.  What finally worked for me was increasing the tension and making sure I went really fast.

I've set a goal of finishing projects this summer and this is the only one I've finished so far.  Admittedly, I have finished a few quilt tops and am gearing up for the backs and quilting.  I've decided, though, that summer time is not a good time for quilting.  It's too dang hot!  I quilted this during nap time one day and was sweating hard!  Thanksfully, I have plenty of quilt tops to finish!

I received these bee blocks awhile ago from my Wonky Quilt Bee friends.  I'd send them scraps of colored fabrics and the same brown print for the tree trunk.  The task was to make appliqued trees.  They came back so awesome! Since this year is about finishing projects, I'm just now getting around to finishing this quilt.  So far, I've managed to complete the quilt top.  It's amazing.

I used Kona Teal for the shashing.  I know you're supposed to use a neutral color for the sashing, but I wanted each block to pop out and the only way to do that was to use a darker color.  Blue seemed like the perfect choice.

I'm hoping to be able to quilt it later this week.  We'll see about that progress!

It’s been awhile since I’ve posted.  I’m still trying to recover from the last two weeks of school and the ramifications (i.e.: stress) of teaching a 1/2 combo class next year.  I’ve been spending time planning for next year, which is not what I’d intended to do during the summer.  I’m hoping that the time I put in now will make the beginning of the year smoother.  I’ve been able to figure out quite a bit, but I feel I still have so far to go!

I have been doing some quilting and knitting and I intend to start posting more.  For now, two blocks for the Wonky Quilt Bee for June.  I finished the blocks today, a day late.  They’re wonky chevron blocks using this tutorial. 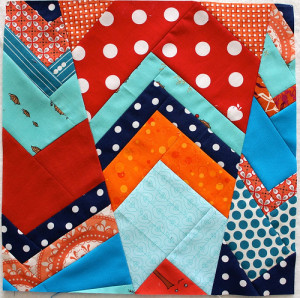 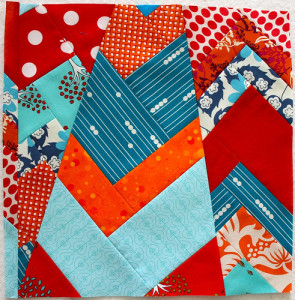 The blocks were a bit frustrating to put together.  The middle panel was easy, but getting the side panels to be the right size was challenging.  I ended up redoing them three different times and by the fourth, decided to sew on another strip rather than redo it.

The sewing was a lot of back and forth cutting, ironing, sewing, etc.  I don’t mind some of that, but this was on the verge of being to much.  I felt like it wasted a lot of fabric, especially since I had to redo the side panels so often.

Admittedly, it’s probably the perfect block to use in a quilting bee.  At the month’s end, you have enough blocks to make a whole quilt without having to make them all yourself.

I can’t wait to see how the whole quilt turns out!

I managed to finish all of my bee blocks for May well before the end of the month.  It helps when two boys nap at the same time!

The first set, for the Sew Modern Bee, I forgot to photograph.  Although I’ve found time to sew and mail packages, I haven’t always remembered to take photos!  Luckily, the queen been photographed them when she received the package.  Rather than repost her photos, I’ll link you over to the flickr pages.  Block 1 and block 2.  The blocks are Garden Fence, from this tutorial.  They were super easy to make, especially since all the fabric was already cut for us!

The second set of blocks were for the Wonky Quilt Bee.  For this month, the queen bee asked for large bear paws. 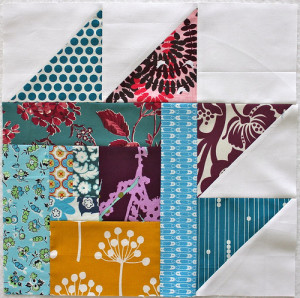 The blocks were fun to make and again, super easy. 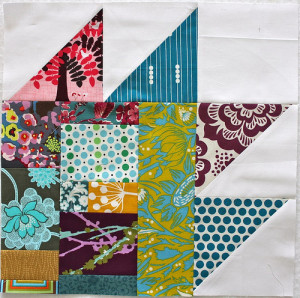 This is the last month for one bee and next month is the last for the other. We are continuing the Wonky Quilt Bee, but turning it into a Traveling Quilt Bee.  I’m super excited to be working on the traveling quilts.  I just need to start thinking about my own colors and ideas for my quilt!

Still no baby.  Liam was two weeks late, so I didn’t really expect this baby to come early, although I kept hoping that he would.  I keep telling myself ____ days left, max (emphasis on the word max).

My lack of blogging is mainly an effect of my exhaustion.  When I have time to blog (Liam’s nap time), my brain is usually too tired to sit and write.  And, so I’m writing during a bout of insomnia when the words are rolling through my head and keeping me awake.  Perfect timing, right?

Anyway, instead of blogging, I’ve been using my time to finish up a few projects, one of them being the blocks for the March Wonky Quilt Bee.  March was Jacey’s month and she requested Polaroid blocks using this tutorial. 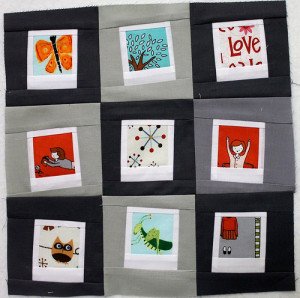 They were super easy to make and once I got into the groove, it went even faster.  The most difficult part was finding enough subjects that were small for the Polaroids.  I had to repeat a few fabrics with different subjects highlighted, so color schemes are somewhat similar. 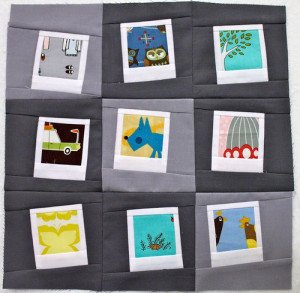 I have plenty of other projects to post about in the coming days, so hopefully I’ll start getting them down on the blog.

As I was typing the last post, I realized that I never posted the blocks I created for the Wonky Quilt Bee for January.

Melissa asked for stars, any kind really, in aqua and red.  I knew the perfect fabric.  Although given the piecing in the first block, I'm not sure I did the fabric justice. 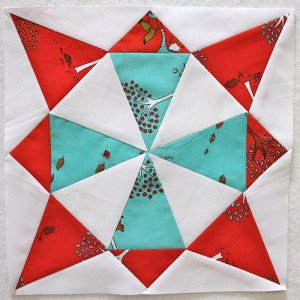 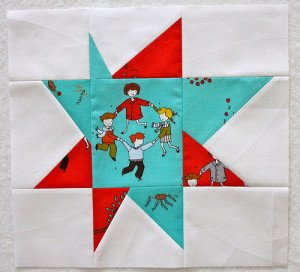 For the second block, I fussy cut the center square.  I'd intended to fussy cut additional center squares for more wonky stars and piece the starts together in some way, but this one came out larger than I thought it would.

I still have a bit of this fabric left over and will have to figure out the perfect thing to use it for.