I got the ingenious idea to rearrange the boys' room the other day.  It's not that I needed something else to do, but rather their room needed more floor space.  With a twin bed and a crib, there wasn't much room to move.

There is a baby gate on the door to keep Liam in his room when he's trying to go to sleep at nap and bed times.  Prior to the rearrangement, the crib was next to the door and we would bungee the gate to the crib to keep it open.  It wasn't the safest arrangement, but it worked.  Now, the crib is on the other side of the room, so I need a new door stop to keep the gate open during non-nap-times. 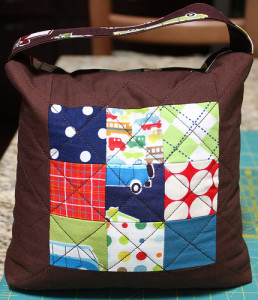 The door stop is made using this tutorial from Oh, Fransson!.  I remember seeing it ages ago and I finally had a reason to make it.

Overall, it's a good tutorial.  I used an invisible zipper, only because it's what I had on hand.  The tutorial has you cut into the corners before you sew them to make it square.  I followed the tutorial, but in retrospect, I wouldn't have cut the corner until I'd sewing across it to square it.  It would have help in not "accidentally" pulling off the zipper pull, which my kind husband spent 10 minutes putting back on because I was too frustrated to do it myself after a no-nap day! 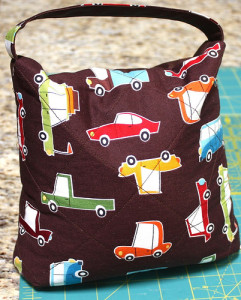 Now, we can keep the baby gate open safely.  However, the toddler still climbs all over every pieces of furniture in the room, including standing on top of a 5.5 foot dresser and removing the ABC cards that are ceiling height.  Ugh!