We celebrated Liam's second birthday a couple weeks ago.  He turned two last week.  He's grown so much and I can't believe he is already two!

Liam is obsessed wth trains.  Birds and trains.  We decided to have a train party for him, with just family. His grandmother baked him a cake, so I decided to make some train cookies for our budding engineer.  I'm not sure the last time I made sugar cookies, nor decorated them, so this was an adventure. 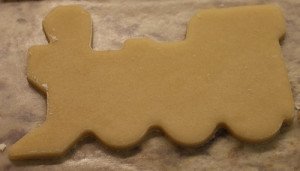 I ordered some train cookie cutters, made some sugar cookies and decorated them.  We outlined the trains in black.  We could have done a smoother job of outlining, but it worked out pretty well.

After the black dried, we made frosting, making sure it was watery enough to be squeezed through a squeeze bottle and filled in the spaces. 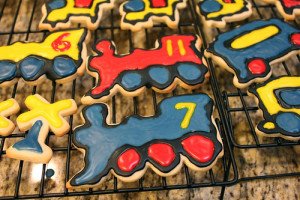 The cookies were super yummy and we were left with plenty of leftovers that have since been eaten.  In fact, I kinda want to make some more.  Although that's the pregnancy talking!

As for being two, Liam is well into his second year.  A couple of weeks ago, his vocabulary exploded.  He's now combining two- to three= words to make a phrase or even a sentence occasionally.  He uses words that we haven't even taught him, mimicking our speech.  This is phenomenal considering that at 18 months we were looking at a speech delay since he wasn't talking at all.

He's pretend playing.  It started with "rocks" on the train tracks and migrated to there being "rocks" everywhere that the Duplo firemen need to remove.  He'll move the "guy" along as if he was walking and make sounds as the man removes the rocks.  It's quite cute.

He's also acquired the negative side of two.  It was like a light switch last week.  All of a sudden, he became more short tempered, wanted us to play with him all the time, and is not as flexible as he used to be.  We're working on it, though.  I'm hoping the flexibilty returns, soon.  He's going to need it once the baby's here!

Overall, we love hearing him laugh and have fun as he learns about his environment.  I guess this means that we're officially into toddler-hood.