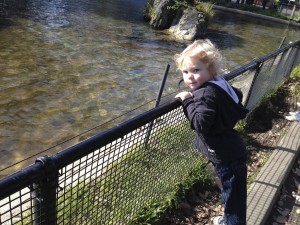 This little one (and his brother) have been keeping me busy when I’m not working.  Life is so much harder with two.  It’s not just doubly hard as one, it’s like four times harder, especially when they’re not in sync.

Oliver is still under a year old.  His birthday is in April.  I’m hoping things will become easier after he’s a year old and I really expect things to become easier in June, when I’m out of school for the summer.  We can begin to re-establish some routines.

Oliver still doesn’t sleep through the night.  We’re trying, but he gets up to eat.  He goes back to sleep very easily, but still wants the food.  Gotta work on weening.  If we can get him sleeping through the night, that will also help immensely.

We went to the San Francisco Zoo today.  Liam had a great time seeing all the animals.  We had never been before, so it was fun to go check it out.  Plus, with our Happy Hollow membership, we have reciprocity, which means we only paid $15 to get in.  A steal!  We also want to check out the Oakland Zoo.  Maybe this summer or during my spring break.

I hope you all are having a great weekend and, if you have tomorrow off from work, a relaxing day off!