I'm trying to finish up a couple of bee blocks before the baby arrives.  So far, I've completed two blocks for one bee, the Sew Modern Bee. 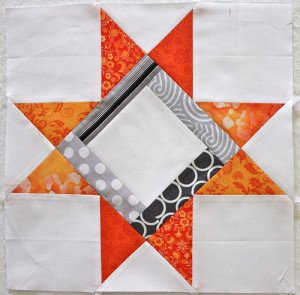 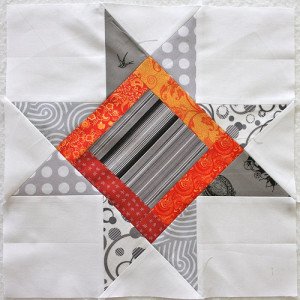 The block was made or Erin, using Another Star Tutorial from Fresh Lemon Quilts.  I used a block from this tutorial series for my last 4 x 5 blocks.

I have to finish the Wonky Quilt Bee blocks and prepare packages to send out for April's Wonky Quilt Bee (my month).  Hmm . . . I wonder if the baby will wait for me to finsih these projects or not!

I got some sewing done yesterday.  Much more than I thought I would.

I kinda finished my bee blocks for November: Kinda meaning that I couldn't finish the last block because there wasn't enough fabric.  I finished one block and the other is almost done.  It's a wonky star, like this small one, but a full-sized block. It only took two years.  I'd made Jordan and my stockings two years ago when I was pregnant with Liam. We knew he was a boy, so I got the fabric to make his stocking, but never got around to it.  Last year he was too young to know the difference and we were remodeling our kitchen.  This year, being 20 months at Christmas, he's a little more into things going on around him.

I also have enough fabric to make the front the same for our next baby's stocking, but not enough fabric for the top flap, lining, and back.  I'm hoping to find something that matches and just go with a different line of fabric.

My husband has been listening to Christmas music for the past week or so.  It's quite cute.  Hopefully we won't be tired of it by Christmas!

Yesterday was a productive day.  Not only did I finish the blocks for the 3×6 Bee, I also finished one block for the Sew Modern Bee.  Unfortunately, I didn’t have enough fabric to finish two blocks. This is, in appearance, a complex block, but really took no time at all to put together.  It was the perfect block for me to be able to complete before the deadline.  The directions are posted here, in case you’re interested.

Now, if I could only be as productive all the time.  I’d be able to make a quilt a week!

Finished these blocks and they are in the mail today, by the deadline, I might add.  I wasn't sure I'd be able to make the deadline, but they turned out to be super easy once I reverse engineered the block, figured out cutting measurements, and how to sew each block. The block is based off this one that I saw a while back.  I was going to follow her tutorial, but couldn't figure out how to resize the block without completely starting from scratch.

I basically drew out the block on a 12 x 12 grid, figured out how to cut the pieces and sewed them together in a logical sequence, which ended up being strips.

I did one block as a "test" block and it came out good.  So, I cut the rest of the fabric and sewed the blocks together assembly-line style.  I'm liking the concept of finishing all the blocks at the same time.  It's a great sense of accomplishment and finality.  It also seems the quickest way to complete a set of blocks like this.  I'm thinking at the rest of the patterns I choose for bees like this will be blocks I can complete at the same time. I managed to get my blocks made and sent out for the 4 x 5 bee.  I was only one day late (needed a Saturday to get to the post office). These blocks were a challenge to make.  Once I got the pattern down, they weren’t complicated, just time consuming.  Right now, time is something I don’t have in abundance.  I blogged about the paper piecing process here. Once I got the process down, each block probably took about 1.5 hours to complete.  However, with a toddler, that becomes little spurts of time here and there. I still have the 3 x 6 bee blocks to finish as well as two other September bees to start and finish.  I’m a bit behind.  How do moms manage full-time work and a toddler at home? It's been a while since I've blogged.  August got away from me.  We had a vacation and I started back at work (I'm a kindergarten teacher).  So, things are just starting to settle down into a sensible routine (whatever that is with an 18-month-old).  I didn't do much crafting last month, so a few things are piled up.

We'll see what I get to this month.  But as the weather cools and the nights start getting darker earlier, I can totally see myself sitting down and crafting in the evenings after Liam goes to bed.

I did manage to squeak in a few bee blocks before the end of the month.  Well, one I finished on Saturday and that was really September, but the bee member knew I'd be late! I'm so looking forward to fall, cooler weather, and resting after the business of summer.

It's my new infatuation.  For the 4×5 Bee (yes, I joined another bee), I wanted to try a block style that I'd never done before and decided to give paper piecing a try.  It's an interesting process that makes my mind turn around in circles and upside down and, at times, frustrating when I didn't cut a piece quite big enough.

I started with this block. I got about halfway through and realized that it was the wrong size.  (doh!)  It says clearly in the directions 10" block.  Somehow I missed that detail.  I completed the block anyway since it was good practice and I like things finished.

The second block I tried was this one (obviously not complete): Again, I got halfway through and something just wasn't right.  It didn't measure out to 12.5", as the directions said it would.  I printed the template per the directions and to the same percentage as I needed to on the previous template, but I should have checked the measurements anyway.  It was a tad small.  I stopped here, although I'll probably finish the block at some point just to have it done.  It measures about 11.75".

Finally, I printed the template to the correct size and checked the measurement before sewing.  This is the resulting (correct) block: I didn't have enough of the pattern green, so I switched to a solid green, which meant that I needed to switch to a pattern blue for the center.  I suppose I could have had two solids.  I love the blue that I used before, but decided that somehow I couldn't have two solids.  Maybe the next one will.

This was definitely a learning experience, sometimes to the point of frustration.  Some tips for paper piecing:

I think that's it for now.  At least that's all the details that are still in my head!  Now to pick out fabric for the other four blocks!

I've been so bad at blogging this summer.  I thought I'd be better at it since I'd have more time, less stress, less work.  Quite the opposite in fact.  The business of work has slowed down, but business of home has sped up.

Chasing after a toddler who climbs in my lap any time I'm on my laptop, outings to keep him even busier, time with family, good meals.  It seems that instead of just letting go of work things, I've acutally taken over things at home that I don't normally do during the school year.  It's a nice change, but still difficult to balance with my desire to spend time doing my things.

As for crafting . . . there's a little bit here and there, but nowhere near the amoung that I'd planned for and anticipated.  I'd had grand hopes to finish our bedroom quilt-as-you-go quilt, to finish the backs of several other quilts, to make a couple tops for myself, to make some shorts for Liam as well as some toy bags for him, along with other home improvement projects.  It's all still possible, but the projects are in piles and seem less and less important.  Although that new quilt for our bed is gaining in necessity as the days are warm and our duvet is falling apart!

For now, though, I work on bee blocks.  You know, because those have a deadline and other people depending on me to finish them.  As for Liam.  He has enough shorts, right?